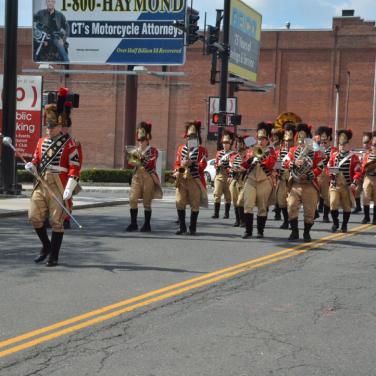 Home of the First Company Governor's Foot Guard since 1888. Contains artifacts of the Foot Guard, military and the state's history. The drill shed has been the site of many public events and used duri

Organized in 1771, the First Company Governor's Foot Guard is the oldest continuously serving military organization in the United States. It is one of the four Connecticut Organized Militia units. Throughout its history, the Foot Guard has represented the State of Connecticut in events around the eastern United States and even abroad in Belgium. It has provided escort duty for more than 20 United States Presidents, three foreign heads of state, several military heroes and other famous people. One of the most notable and recognizable features of the Foot Guard is the uniform consisting of the scarlet grenadier coats, modeled after the British Coldstream Guard regiment's uniform and the bearskin busby hats. The role of the Foot Guard is predominantly ceremonial now, but the Foot Guard maintains an active schedule of events during the year. The infantry unit's training is much like current military training. The entire command, which includes the Foot Guard band, participates in parades and public events. They can be and are called up for active duty by the State for events such as the Governor's Inauguration and annual training. They also sponsor an AKC sanctioned dog show each February. Many requests for the Foot Guard do not require that all members be present to be fulfilled and members participate in smaller groups. The Color Guard unit, the busiest group in the command and well known for precision and military bearing, presents the colors at state, military, public, athletic, school and private functions as many as 50 times a year. The band, which celebrated its 100th anniversary in 2004, and the Governor's Own Brass Quintet, made up of members of the band, participate in the parades attended by the entire command and also perform at public concert venues, local schools, senior centers and the State's Veteran's Home and Hospital. The Honor Guard unit, as members of the firing details or playing taps, assists the Connecticut State Military Department with rendering appropriate honors at the funerals of deceased veterans. The rifle team competes against the other state militia units, the National Guard and private gun clubs. The Foot Guard has recently taken on a role as part of the Medical Reserve Corps in the Capitol Region Emergency Planning Committee's plans and has been trained to assist state and local communities in the event of disaster by assembling and assisting the staffing of portable medical buildings. The Foot Guard Armory built in 1888, has a history of its own. When built, it housed one of the largest auditoriums in Hartford and has been used for Foot Guard and public functions including musical performances, variety shows and professional boxing. Many Connecticut governors' inaugural balls were held there. During the floods of the early 20th century, the armory was federalized and used to house displaced people. Many artifacts of Foot Guard, Connecticut and military history can be found at the armory and in the Foot Guard Museum.