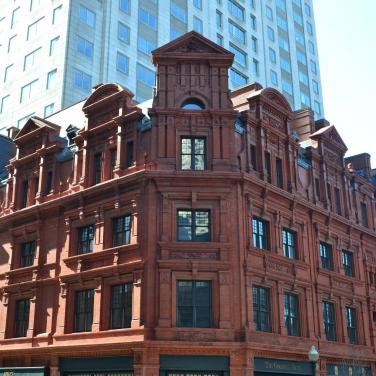 A timeless classic with modern flair. Situated in the heart of downtown Hartford since 1881, The Goodwin is a true landmark of style where architectural details of a colorful past blend seamlessly with a renewed eclectic and cosmopolitan vibe. Distinctive from a distance. Unforgettable once experienced - take particular note of the classic... Read More

The Goodwin story began in 1881, when two brothers, James J. Goodwin and Rev. Francis Goodwin, developed this classic structure as a landmark apartment building. Originally developed as an upscale apartment building and later converted to a hotel, The Goodwin was a classic and prestigious address from the start. With a star-studded history, characters like J.P. Morgan resided there during visits to his hometown, and it has retained its sophistication and appeal ever since. The hotel was converted in the late 1980s in conjunction with the Goodwin Square project, its façade was preserved from the apartment building, and has become an iconic Hartford landmark.

For its 2017 rebirth, The Goodwin will exude a vibrant City style, while retaining elements of its history, heritage and tradition to demonstrate the authentic character that makes it so special. Guest rooms have been reimagined. Interior spaces have been thoughtfully designed as welcoming gathering areas. Original fireplaces remain, built-in wood closets restored. The entire staff has been classically trained in the lost art of service and hospitality. And a world-class brasserie adds to the unmistakable Goodwin experience.

Cosmopolitan and urban-chic…yet grounded in a timeless and rich history. Welcome to the only boutique hotel in Hartford.

Simply put, The Goodwin is a one-of-a-kind boutique hotel in Hartford focused entirely on providing exceptional guest experiences. Expect an attention to detail and emphasis on service that is refreshingly genuine. Ensuring each guest’s stay is truly memorable is something we take great pride in.

Our downtown location puts you in the heart of Hartford’s very best – shopping, dining, entertainment, art, culture. Our property is a vibrant hub where guests find themselves within easy reach of all that Hartford has to offer – making The Goodwin a place to gather, connect and share.