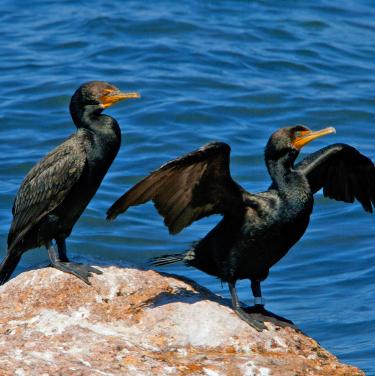 Stretched across Connecticut's shoreline, this National Wildlife Refuge was the first Federally-owned conservation land in the state when it was established in 1972.

Stretched across Connecticut's shoreline, this National Wildlife Refuge was the first Federally-owned conservation land in the state when it was established in 1972. First known as Salt Meadow National Wildlife Refuge, it was renamed in 1987 to honor the late U.S. Congressman Stewart B. McKinney, who was a great champion of the refuge’s expansion. Today the refuge is comprised of eleven units that span 70 miles of Connecticut coastline.

Located in the Atlantic Flyway, the refuge provides important resting, feeding and nesting habitat for many species of wading birds, shorebirds, songbirds and terns, including the endangered roseate tern. Adjacent waters serve as wintering habitat for brant, scoters, American black duck and other waterfowl. Mammals, reptiles, aquatic species and other wildlife are also abundant throughout. Overall, the refuge encompasses more than 1000 acres of forest, barrier beach, tidal wetland and fragile island habitats.

Visitor areas including the Salt Meadow Unit (Westbrook), Great Meadows Unit (Stratford), and Milford Point Unit (Milford) are open year-round from 1/2 hour before sunrise to 1/2 hour after sunset. Trails and platforms at these three units offer views of some of the only large coastal wetlands remaining in Connecticut.

Visitor areas at the Outer Island Unit (Branford), Sheffield Island and Chimon Island Units (Norwalk), and the Calf Island Unit (Greenwich) are open daily from late May to September. These units offer opportunities in birding, kayaking, trails, beach-going, and more.

The Faulkner Island Unit (Guilford) is open to the public one weekend per year in early September. This is done so visitors may see the famous 1802 lighthouse there and hear interpretive talks about the scientific work done on the island with common terns and endangered roseate terns every spring and summer.

The refuge offers interpretive programs on natural and cultural topics throughout the year. Examples of these include owl prowls, wildlife photography workshops, programs on plants and animals, history talks and nature walks. Opportunities to participate in curriculum-based environmental education lessons for schools, scout troops, home schoolers and others are offered as well.

A waterfowl hunting program at Great Meadows Unit (Stratford) is open during the fall and winter months each year. A free permit is required to participate in this program.

Other Amenities: Open After COVID