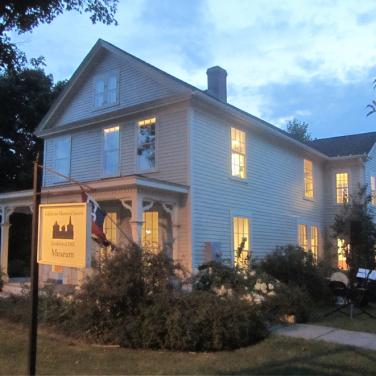 The Colchester History Museum, housed in a restored mid-19th century building, offers exhibits about the long history of Colchester.

The Colchester History Museum houses four exhibit rooms illustrating the diverse history of Colchester and the region.  The exhibits include the History of the Bulkeley Family, pilgrims to the new world who went on to become ministers, statesmen, and founders. The exhibit includes the story of the discovery and excavation of the Gershom Bulkeley Tomb. A special exhibit, Emerging from the Shadows: the Story of Colchester's School for Colored Children, 1803-1840 tells the story of a unique educational opportunity for African Americans in Colchester during the early in the 19th-century.  Additional exhibits include the History of the Champion Family; whose military history impacted the outcome of the Revolutionary War, the Hayward Rubber Company; the boom and bust of an important industry in town, and Colchester's Roots in Agriculture: Then and Now; the history of farming from Colchester's founding in 1698 to the resurgence of farming now.

The museum is free and open to all.  No reservation is necessary unless you wish to schedule a private visit.