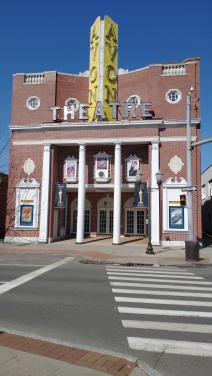 The Best Of Independent, World Documentary And Cult Films

The mission of the Avon Theatre Film Center is to preserve and operate the historic Avon Theatre by providing a culturally significant film, educational and programmatic palette, which draws patrons from the greater Stamford region.
The Avon Theatre Film Center regards cinema as a uniquely effective vehicle for artistic expression and fulfills its mission by bringing the community together to share experiences that entertain, educate, touch and inspire audiences of all ages and backgrounds. In addition to presenting independent, art, foreign language and classic films and documentaries, the Theatre partners with other local and regional organizations to present programs that appeal to different audiences and deal with the critical issues of the day. Some of the most meaningful experiences provided at the Avon have been the moderated dialogues and panel discussions with filmmakers, actors and other subject experts that are frequently offered after our screenings. The landscape of today’s cinema is rapidly changing with the consolidation of large studios, changes in film distribution practices and the expansion of streaming media and other technological options. The good news is that none of this will limit the creativity of talented filmmakers! While we must all work to keep pace with changing technology, there is still no replacement for seeing a film on the big screen for which it was created and enjoying the cinema in a community setting while engaging and reacting with other members of the audience!  The cinema, like everything else, will evolve, but it will always remain an exciting and dynamic art form and the Avon Theatre Film Center looks forward, enthusiastically, to its second 80 years of entertaining, educating and inspiring audiences!

Other amenities: Concessions, beer and wine sales, dining nearby

Pricing: General admission non-member $14.50, Members $9, Students and Seniors: Monday-Thursday only $11, Special event pricing ranges from $16 -$25 per person, there may be an additional discount for members.