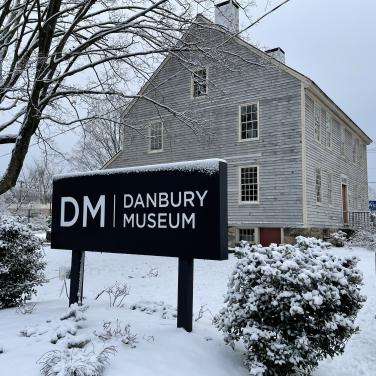 Tour four historic buildings and learn about the role of Danbury in the Revolutionary War, the city's hatting industry history, and visit the studio of famed contralto Marian Anderson...all on our museum campus @ 43 Main Street! And thanks to the generosity of Savings Bank of Danbury, we were able to complete the rehabilitation of the Charles... Read More

The John & Mary Rider House is the Danbury Museum’s signature historic structure. The house that previously stood on this property, the home of Jonah Benedict, was destroyed  by fire when the British troops raided Danbury on April 26, 1777. The property was bought from the Benedicts and this home was constructed in 1785.The Rider House was saved from destruction by the combined efforts of the Daughters of the American Revolution and other concerned citizens.

The John Dodd Hat Shop was built in 1790 and was originally two doors south of the Rider House on Main Street. The Hat Shop is typical of small concerns that would have lined Towne Street (modern day Main Street) in the 18th century. To honor Danbury’s heritage as a hat making center, the Dodd Hat Shop contains a hatting exhibit and many hats and hatting-related artifacts.

The Little Red Schoolhouse is a reproduction of a typical one-room schoolhouse found in the greater Danbury area during the 18th and early 19th centuries. Bricks from the old Balmforth Avenue school were used to construct our building. The Schoolhouse houses artifacts that relate to education history and early American schooling in Danbury and is an integral part of our school field trips as well.

The Marian Anderson Studio: In 1943, famed contralto Marian Anderson and her husband Orpheus Fisher bought a farm on Joe’s Hill Road in Danbury. They named their property Marianna Farm and remained there for many years. Mr Fisher, an architect, built this studio for his wife where she could sing and rehearse.After her husband’s death in 1986, Ms Anderson continued to live at Marianna Farm until 1992, a year before her death in 1993.In 1993 the Studio was donated to the Danbury Museum and it was rehabilitated and opened to the public in 2005.

Huntington Hall is the modern building on campus that houses a research library/archive as well as our exhibit space.

The Charles Ives Birthplace Museum is located at 5 Mountainville Avenue is available only by pre-booked, guided tours given on Fridays and Saturdays. Visit the home and learn more about the sights and sounds that were so influential to Connecticut's State Composer and Pulitzer Prize winner, Charles E. Ives.

Dates of Operation: Year round.